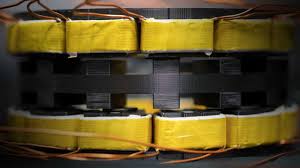 Energy efficiency – either for electric or ICE cars – is achieved by one of these three pillars: mass, aerodynamics or powertrain. Researchers from the Carnegie Mellon University will be able to tackle two of these pillar at once with a new soft magnetic material they have developed. It would be able to make electric motors up to three or four times lighter. With the same performance.

The technical name of these magnets is "metal amorphous nanocomposite materials". The magic, or else, the science on these soft magnets, is their ability not to heat up as much as common magnetic materials. That allows them to achieve higher RPMs when applied to electric motors.

"The faster you can switch the magnetic material, the faster you can spin the motor, the more power you get out of it," said Michael McHenry, a professor of materials science and engineering that is one of the leading scientists on this research.

"If I can spin the motor at higher and higher speeds, I get more and more power. That means I can use a smaller motor for the same job."

Electric cars have a big problem mass problem with their battery packs, something that could be solved with new battery technology to increase power density, such as the one developed by IMEC. But reducing weight on electric motors is also very welcome.

The main goal of the scientists seems to be developing motors for robots, but electric cars would also benefit from it. Professor McHenry's team is also working on new electric motors designs with an axial flux approach. Similar to the one from Magnax.