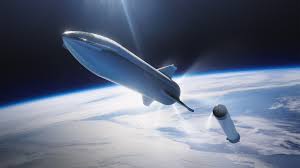 This would mean the area of the cross-section would be 4 times higher. If the height was also doubled then it would have 9 times the volume. The engines would likely be upgraded for the Ultra Heavy Starship 2.0. This means the next rocket might be able to launch over 1000 tons per launch.

This would be about twice the payload of the Sea Dragon. The Sea Dragon was a 1962 conceptualized design study for a two-stage sea-launched orbital super heavy-lift launch vehicle. The project was led by Robert Truax while working at Aerojet. It would have had a payload capacity of 550 tons. It would have been 150 meters tall and 23 meters in diameter.

In 2016, SpaceX had a 12-meter diameter ITS rocket design. It was designed to launch 300 tons to orbit and with refueling could launch 450 tons to Mars.