> Terminally-ill scientist is about to 'transform' into world's first full cyborg - pirateswithoutborders.com 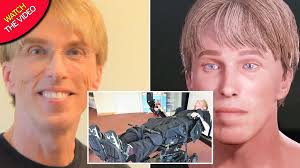 A terminally-ill scientist who is dying from a muscle wasting disease has taken the final steps to become the world's first full cyborg .

Dr Peter Scott-Morgan, 61, was diagnosed with motor neurone disease two years ago, but instead of accepting his fate he decided to challenge what it meant to be human.

He said he wanted to push the boundaries of what science can achieve so decided to extend his life and become fully robotic - known as Peter 2.0.

The world-renowned roboticist has already undergone a series of incredibly complex and risky operations during his journey. This has included developing a remarkably life-like avatar of his face before he lost any muscle.

The avatar is designed to respond using artificially intelligent body language and he has also explored eye-tracking technology to enable him to control multiple computers using only his eyes.