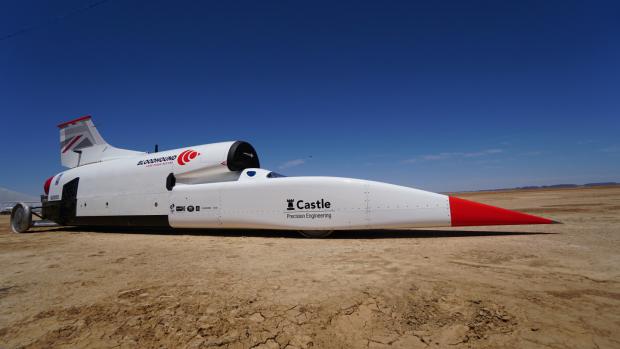 A car with a jet engine built by Rolls-Royce, which is intended to shatter land speed records, has begun tests in the South African desert.

The Bloodhound supersonic car reached a top speed of 334mph during tests this week.

Scroll down for video.

Mr Green will also be driving the Bloodhound this time around and is hoping to beat his own record, promising an 'assault' on the benchmark in 2020.

Powered by the engine of a Eurofighter Typhoon fighter jet, the team hopes Bloodhound will be able to reach faster speeds by inching up 50mph incrementally with each run.

The EJ200 jet engine was partly developed by Rolls-Royce and the car will produce 135,000 thrust horsepower, equivalent to more than 150 Formula One cars.