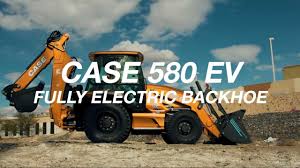 CASE Construction Equipment unveiled "Project Zeus" - the all-new, all-electric CASE 580 EV backhoe loader, which turns out to be the first in the industry. We already saw electric excavators, loaders and some cool mining vehicles, but mostly on just a pilot scale.

It's equipped with a 90 kWh lithium-ion battery and should be able to support an eight-hour workday in most of applications, offering:

power and performance equivalent to other diesel-powered backhoes

Two of the CASE 580 EVs were already sold and the company says that it can produce some more this year for early adopters, before launching higher volume production in the future.

"Two units have already been sold to utilities in the United States — NYSEG and RG&E, AVANGRID companies, and National Grid. CASE has the capability to produce additional units throughout 2020 before ramping up production to meet greater demand in following years."