> Moon Has More Metal Which is More Exposed in Larger and Deeper Craters - pirateswithoutborders.com 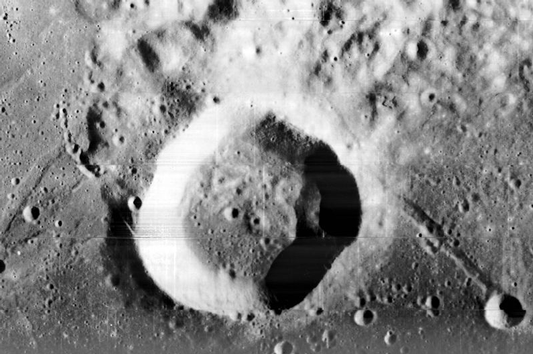 Using Mini-RF, the researchers sought to measure an electrical property within lunar soil piled on crater floors in the Moon's northern hemisphere. This electrical property is known as the dielectric constant, a number that compares the relative abilities of a material and the vacuum of space to transmit electric fields, and could help locate ice lurking in the crater shadows. The team, however, noticed this property increasing with crater size.

"It was a surprising relationship that we had no reason to believe would exist," said Essam Heggy, coinvestigator of the Mini-RF experiments from the University of Southern California in Los Angeles and lead author of the published paper.

Discovery of this pattern opened a door to a new possibility. Because meteors that form larger craters also dig deeper into the Moon's subsurface, the team reasoned that the increasing dielectric constant of the dust in larger craters could be the result of meteors excavating iron and titanium oxides that lie below the surface. Dielectric properties are directly linked to the concentration of these metal minerals.

If their hypothesis were true, it would mean only the first few hundred meters of the Moon's surface is scant in iron and titanium oxides, but below the surface, there's a steady increase to a rich and unexpected bonanza.