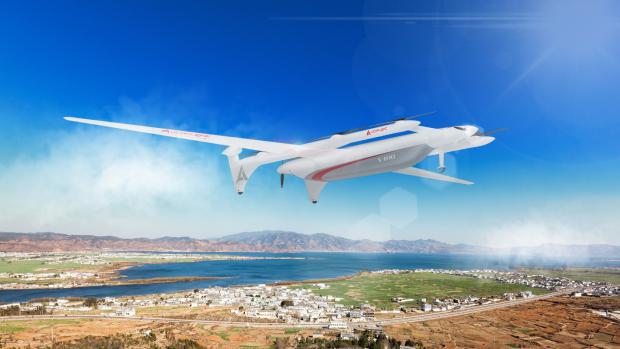 The new V400 Albatross is an unmanned cargo drone capable of carrying payloads up to 100 kg (220 lb) over impressively long distances. Its fully electric version offers a range of 300 km (186 mi) carrying a full payload, and a hybrid version is available as well, promising 1,000 km (620-mile) flight ranges.

As with many eVTOL designs, it's built to transition, rising and landing vertically as a hexacopter on six large props, then transitioning to horizontal flight on a slim, 9-metre (29.5 foot) wing and a smaller canard wing at the front, with power supplied by a pair of push and pull props on the front and rear of the main fuselage. Its carbon composite body keeps weight down to around 300 kg (660 lb).

It's designed to operate autonomously, using a flight controller that Autoflight is amusingly forced to stress has "completely independent intellectual property rights." It's got built-in sense-and-avoid capabilities, and full-time 4G/5G data connections along with a full sensor suite that includes ground radar to assist with VTOL.

Autoflight says the Albatross will be used for "express logistics," and emergency operations, particularly where mountains and islands make ground transport tricky or time-consuming.

But the company has bigger targets in its sights, and in the same press conference it announced its intention to move into the air taxi space with plans for autonomous passenger-carrying eVTOLs, as well as larger-scale logistics aircraft. Autoflight says it's looking at the "air logistics operation system" side of the problem as well as 3D vertical commuting.