> Visualizing All Of Earth's Satellites: Who Owns Our Orbit? - pirateswithoutborders.com

Visualizing All Of Earth's Satellites: Who Owns Our Orbit? 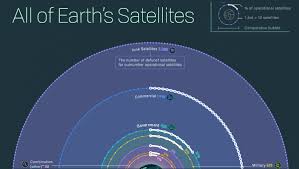 Today, as Visual Capitalist's Therese Wood details below, there are seemingly countless benefits and applications of space technology. Satellites, for instance, are becoming critical for everything from internet connectivity and precision agriculture, to border security and archaeological study.

Space is Open for Business

Right now, there are nearly 6,000 satellites circling our tiny planet. About 60% of those are defunct satellites - space junk - and roughly 40% are operational.

As highlighted in the chart above, The Union of Concerned Scientists (UCS), determined that 2,666 operational satellites circled the globe in April of 2020.

Over the coming decade, it's estimated by Euroconsult that 990 satellites will be launched every year. This means by 2028, there could be 15,000 satellites in the skies.