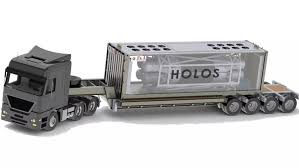 In 2008, the Government Accountability Office estimated that over 900,000 gallons of fuel went to bases around the world for basic power needs such as lighting and refrigeration. And according to a 2009 Army assessment, one soldier died for every 24 fuel convoys in Afghanistan.

Enter "Project Dilithium" - the Army's latest stab at a portable nuclear reactor, which should fit on a truck and a C-17 aircraft, set up in under 72 hours, and be able to provide up to 10 megawatts of power for three years without refueling. The reactor - weighing in at under 40 tons, must also be able to be disassembled within a week. Oh, and it's got to be meltdown-proof.

"Energy usage during contingency operations will likely increase significantly over the next few decades," reads the proposal request. "The modern operational space has amplified the need for alternative energy sources to enable mobility in forward land based and maritime military operations."