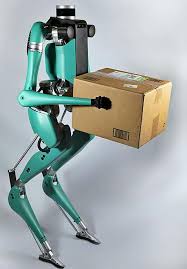 That's the future that Ford is envisioning in order to solve what researchers are calling "the last 50 foot problem". If an autonomous vehicle arrives at your house for a delivery, the longstanding question has been: "Who is going to carry the package, grocery bags or pizza to your doorstep?" The answer is, of course, a robot.

According to Bloomberg, Ford has been trying out "Digit", an android that has two legs and two arms capable of carrying up to 40 pounds, in addition to a camera in its torso topped with a laser radar sensor.

Despite its odd look, business minds have the far more important question of profit on their minds. Driverless delivery reduces the focus on safety of human passengers and helps solve a burgeoning problem that has developed as a result of the rise of online shopping: delivery costs. For example, Amazon spent $27 billion on deliveries last year alone.