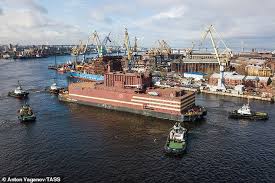 Russia has bragged that its new sea-going nuclear power station is 'invincible against tsunamis' after critics branded it a 'floating Chernobyl'.

Rosatom, the state company which has spent more than a decade building the Akademik Lomonosov, said that comparing their vessel to the Soviet power plant which blew up in 1986 is like 'comparing a 100-year-old automobile to one today.'

They point to upgraded reactors, a specially designed pier to keep away waves and ice, and the constant presence of national guardsmen as reasons that activists have nothing to fear from the new technology.

Safety improvements and the fact that the reactor will be at sea also makes it 'invincible from tsunamis and other natural disasters', the company said.

In the past, it has bragged that the reactor will be tested 'up to 110 per cent capacity' before being brought online, the Daily Telegraph reported.

The Lomonosov was constructed in St Petersburg before being towed to Kola Bay, near Murmansk, in April where it will be fuelled up.

From there, it will be towed to the remote mining region of Pevek where it will be used to power homes and mining operations.