Prenatal Ultrasound--Not So Sound After All 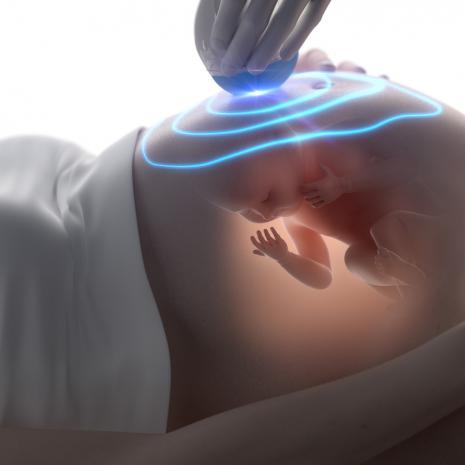 Prenatal ultrasound is a taken-for-granted component of modern maternity care, to such an extent that most obstetrician-gynecologists find it impossible to practice their profession without it. American women now routinely undergo four to five ultrasounds per pregnancy. Despite the absence of demonstrated benefits, there is also a trend toward "new applications of ultrasound…at earlier stages in pregnancy" (p. 47), including Doppler fetal heart rate monitoring that magnifies the unborn baby's exposure manyfold.

A Scottish physician developed the first 2D ultrasound machine in the late 1950s. Intended for prenatal scanning as well as gynecological tumor diagnosis, the machine drew on the doctor's prior experience with military radar technology. Now, the latest growth sector in ultrasound technology is 3D imaging (which shows the baby's face) or 4D ultrasound that creates a "live video effect, like a movie"—luring parents into stockpiling "keepsake" footage of their baby's in utero facial expressions.

While the U.S. Food and Drug Administration (FDA) tells prospective parents that ultrasound exams provide "a valuable opportunity to view and hear the heartbeat of the fetus, bond with the unborn baby, and capture images to share with family and friends"—and the Centers for Disease Control and Prevention (CDC) denies any association between ultrasound and adverse maternal, fetal or neonatal outcomes—not everyone shares the agencies' complacency. In fact, two recent books make the opposite case. One author—backed up by over 1500 scientific citations—argues that prenatal ultrasound is so harmful to children that it "should be banned from obstetrics immediately." The other contends that the "subtle and not-so-subtle" biological effects of ultrasound "have set the human species on a tragic path" from which it may take generations to recover.

… a single exposure to ultrasound produced cellular and DNA damage similar to 250 chest x rays—and damage was permanent and heritable for ten generations and beyond.

Few prospective parents realize that ultrasound technology is not just sound waves but is based on non-ionizing radiation. Other examples of man-made non-ionizing radiation include cell phones, cell towers, cordless phones, Wi-Fi and more. Although ionizing radiation (think X-rays) has the reputation of being more powerful, non-ionizing radiation is plenty capable of producing biological effects—including altering and damaging cells. In the mid-1980s, a best-selling doctor/author likened ultrasound to other "unproven" technologies "being sold to the public as being 'perfectly safe'" and scolded the medical profession for failing to take the "necessary steps to protect people against a malignant technology." Around the same time, the World Health Organization declared (in vain) that concerns about ultrasound's clinical efficacy and safety "do not allow a recommendation for routine screening."

According to the author of one of the recent ultrasound critiques, the technology causes far-reaching damage. Describing a series of studies published in the late 1970s and early 1980s, the author notes that "a single exposure to ultrasound produced cellular and DNA damage similar to 250 chest x rays"—and "[d]amage was permanent and heritable for ten generations and beyond." Forms of damage included "DNA shearing, single and double strand breaks, chromosome rearrangements and DNA uncoiling, deformities and mutations in offspring, as well as the complete deactivation of genetic material within sonicated cells."