> World's Largest Electric Vehicle is a Dump Truck That Doesn't Even Need to Be Plugged in ... - pirateswithoutborders.com

World's Largest Electric Vehicle is a Dump Truck That Doesn't Even Need to Be Plugged in ... 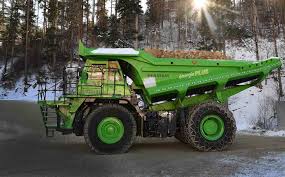 This dump truck is the largest electric vehicle in the world—and since it generates all the electricity that it needs for transportation, it does not even need to be manually recharged.

The Elekto Dumper—also known as the eDumper—is a 45-ton construction vehicle which is used to transport limestone and rock from Swiss mountaintops.

The vehicle works by ascending steep inclines with an empty cargo. Once it is loaded with up to 65 tons of ore, it uses a "regenerative braking system" to capture all of the energy that is created by traveling downhill so that it can completely power itself for its next uphill journey.

Kuhn Schweitz, the German manufacturing company responsible for creating the eDumper, says that by making an average of 20 trips up and down a mountain every day, the trucks are able to generate more than 200 kilowatt hours of surplus energy daily, or 77 megawatt-hours per year.

"This is pure magic," Formula E driver Lucas di Grassi told CNN after being introduced to the trucks. "That's the real-world application of EV. Making it cheaper, more efficient and greener."