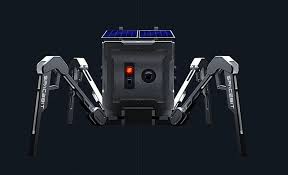 On October 10 at a New Scientist Live event in London, Spacebit's founder and CEO Pavlo Tanasyuk showed off the rover, which is not only the first to use legs instead of wheels to move about but will also be the smallest lunar rover ever launched.

If successful, Spacebit's Walking Rover, as it is called, would not only be the first commercial rover to reach the Moon but would also make Britain the fourth nation to accomplish a lunar surface mission after the US, Russia, and China.

According to Spacebit, the Rover will be carried to the lunar surface by the Astrobotic's Peregrine lander, which is scheduled to launch under a US$79.5 million contract atop a Vulcan Centaur rocket from Cape Canaveral Air Force Station in Florida in 2021.

The Walking Rover will weigh under 1.3 kg (2.9 lb) and be powered by a solar-charged battery that will keep it running during its 10-day mission. It has swarm intelligence and as well as walking on its four legs it can jump in the low lunar gravity.