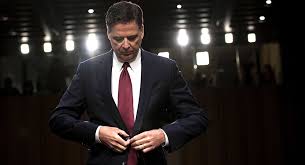 "James Comey Would Like to Help [get rid of Trump]".  This may not seem newsworthy, yet it is the title atop an instructive article today by Matt Flegenheimer of the NY Times.  His article makes it clear that, for its part, the Times remains determined to support former FBI Director James Comey and sustain the discredited Russia-gate narrative they share — to the point of helping Comey and his partners-in-crime avoid prison. (See: from the New York Times.)

In late August, the Department of Justice decided to let Comey off with a slap on the wrist for leaking to the NY Times, through an intermediary, highly sensitive information from his talks with President Donald Trump. At that juncture, it was already a no-brainer to warn that the victory lap Comey chose to run was clearly premature. (See, for example: from the Wall Street Journal.)

Consequential leaks to the media by a former FBI director are serious enough.  Now, however, we are talking about felonies.  And this time Comey is standing in such deep kimchi that he may drown, despite how tall he is, and despite NYT preemptive puff pieces protesting purity of the caliber of Caesar's wife.  This time, even with the Establishment media and Comey's accomplices offering fulsome praise for him, there is some serious doubt as to whether or not he will be able to wangle a Stay-Out-Of-Jail Card.  Why are they running scared?