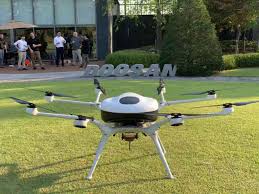 The exercise was the result of a collaboration between Texas-based drone development company Guinn Partners, Georgia-based Skyfire Consulting, the US Department of Health, and drone manufacturer Doosan Mobility Innovation – the latter supplied the aircraft, a hydrogen fuel cell-powered DS30 octocopter.

Utilizing its temperature-controlled payload system, the drone was used to transport live bacteria samples from a hospital on the Caribbean island of St. Croix to a testing facility on the neighboring island of St. Thomas. This involved crossing 43 miles (69 km) of open ocean. Upon successfully reaching its destination, the copter reportedly still had almost 30 minutes of flight time left on its fuel cell.

According to Guinn Partners, it can ordinarily take up to a week before patients' biological fluid samples are transported between the two islands by manned aircraft – in the case of illnesses such as Dengue fever, the infection can progress to dangerous levels within that amount of time. Because using a drone is much cheaper and simpler, though, samples could conceivably be sent to St. Croix immediately.