> Military robots win search and rescue competition as they search for survivors in... - pirateswithoutborders.com

Military robots win search and rescue competition as they search for survivors in... 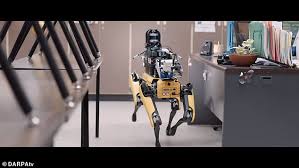 Scientists convened on an unfinished underground power plant in Elma, Washington to test a group of autonomous military robots in a simulated disaster scenario.

The scientists weren't taking part in an experiment but a competition sponsored by the Defense Advanced Research Projects Agency (DARPA), as part of its efforts to develop a range of autonomous robots to fill a variety of military roles.

'The goal is to develop software for our robots that lets them decide how to proceed as they face new surprises,' JPL's Ali Agha said.

'These robots are highly autonomous and for the most part make decisions without human intervention.'

CoSTAR's robots autonomously explored the underground plant, which had been designed to simulate an urban disaster environment with a carbon dioxide leak and warm air vent.