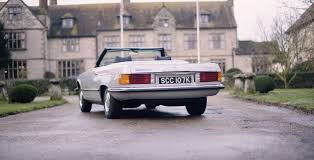 Now whether or not you're on board with the idea that classics should be converted to run on electricity, it's a trend that is gaining more and more traction. Projects vary greatly in scope, ambition and quality, but this one by a shop specializing in restoring classic Mercedes-Benz SLs has to be said is rather tantalizing whichever side of the barricade you may find yourself on.

The company that did the conversion is called The SL Shop and it operates in Stratford Upon Avon, in Warwickshire, the United Kingdom. It normally only does quality SL restorations (and restomods), but with this particular R107 model, it took things further and removed the 3.5-liter V8 engine that made 192 horsepower; it was enough to give the SL350 a leisurely sprint time to sixty of 9.9 seconds.

No word on what exactly powers it, but The SL Shop does say it's motivated by two motors and is noticeably faster than the V8; it also has a claimed real world range of 150 miles (240 km). Furthermore, it now apparently has almost perfect 50/50 weight distribution and in being converted into an EV, it's only gained around 220 pounds (100 kg) compared to the standard car.