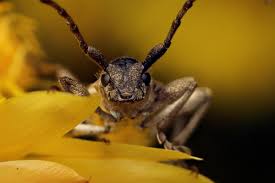 The focus of the study was a hardy little bug called Neocerambyx Gigas. This species of longhorn beetle is commonly found in Thailand and Indonesia, chilling out around active volcanoes where summertime temperatures soar above 40 °C (104 °F) on the regular, and the ground can get as hot as 70 °C (158 °F).

So just how do these beetles handle the heat? Finding out was the goal of the new study by researchers at the University of Texas at Austin, Shanghai Jiao Tong University, and KTH Royal Institute of Technology. The team discovered how the beetle's shell structure helps it cool down, and mimicked it to make a new passive cooling film.

The longhorn beetle, it turns out, has tiny triangular structures on its wings that reflect sunlight, while also allowing its body heat to escape. So, the researchers set out to mimic that structure in a material.