The UAE's first interplanetary mission to Mars set for launch 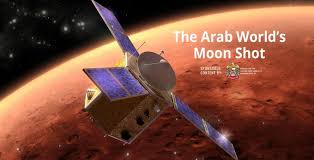 This summer, the United Arab Emirates aims to join the ranks of just a handful of elite space-faring countries around the world by launching its first interplanetary mission to Mars. For the last six years, the small Middle Eastern country has worked tirelessly to build a spacecraft that can orbit the Red Planet to study its atmosphere and weather. Now, the mission is set to launch on top of a Japanese rocket.

Know as the Emirates Mars Mission, the project will kickstart a busy summer of missions to Mars. Following this launch, China also plans to launch an orbiter, rover, and lander to the Red Planet on July 23rd. Shortly after that, on July 30th, NASA is set to launch its next rover to Mars, called Perseverance. All of these missions are trying to get off the ground during a very small window this summer when Earth and Mars come closest to one another on their orbits around the Sun. This planetary alignment only happens once every two years, so if any of these missions can't launch this summer, they'll have to wait until 2022 to try again.