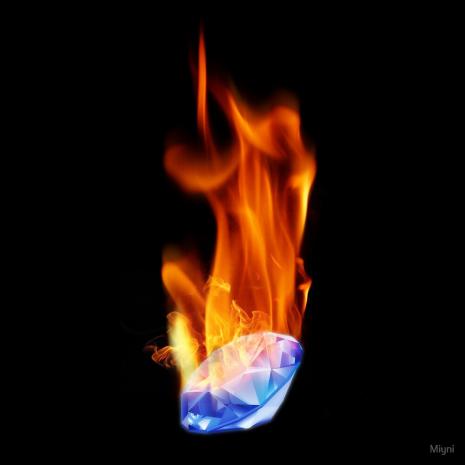 Diamonds are forever, or so the slogan goes. But with the proper application of heat and enough oxygen, a diamond can go up in smoke.

Diamonds are carbon, just like coal. It takes a bit more to get them burning and keep them burning than coal, but they will burn, as numerous YouTube demonstrations will attest. The trick is to create the right conditions so that a solid diamond can react with the oxygen required to fuel a fire.

"You have to convert that solid [carbon] into a gas form, so it can react with the air to make a flame," said Rick Sachleben, a retired chemist and member of the American Chemical Society.

The best way to do that? Heat — and lots of it. In room temperature air, diamonds ignite at around 1,652 degrees Fahrenheit (900 degrees Celsius), according to West Texas A&M University physicist Christopher Baird. For comparison, a high-volatile coal (coal containing a relatively high amount of easily released gases) ignites at about 1,233 F (667 C), whereas wood ignites at 572 F (300 C) or less, depending on the type.

When first heated, a diamond will glow red, then white. The heat enables a reaction between the surface of the diamond and the air, converting the carbon to the colorless and odorless gas carbon monoxide (a carbon atom plus an oxygen atom).