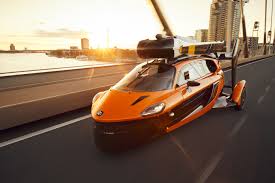 Registration and certification are an under-discussed challenge for people who are trying to make multi-mode three-dimensional vehicles a full-production reality. It's expensive enough to certify a new production street vehicle or a new aircraft, let alone having to jump through two sets of hoops for one low-volume product that tries to do it all. It's a brutally long tunnel of (perfectly necessary) legislation to get through, but Pal-V is starting to see some light after 20 years of work.

The Liberty is a three-wheeler, both to save weight in the air and because the category is easier to street-certify than a four-wheeled car. It's not a bad compromise, you still get a reasonably stable ride with a roof over your head. And it'll certainly turn heads; the folded-up top rotor and large retracted tail fins make it look a bit like half a McLaren loaded up with gear for some weird snow sport that hasn't been invented yet.