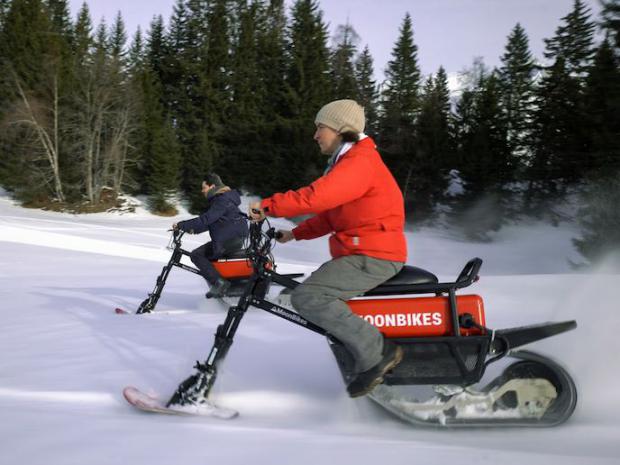 We've seen it with the popularization and evolution of ebikes, and electric tech is slowly finding its way into more demanding powersports applications, like electric dirt bikes and snowmobiles. French startup MoonBikes Motors is carving some space between the e-snowmobile and e-dirt bike categories, creating a full-throttle electric snow bike meant to travel lightly and deliver sharp, explosive exhilaration on the snow.

It's that time of year when experimental all-electric snow machines start rolling out from their high-altitude garages to carve their signatures into the Alpine snow and public consciousness. Last year it was the Austrian-built BobSla snow-kart motoring around its home turf at the Obergurgl-Hochgurgl ski area, and this year it's the French-crafted MoonBike all-electric snow bike spraying snow in its own corner of the Alps.

Designed for both all-out snowy thrills and dutiful utility, the MoonBike features a snowmobile-like combination of rear track drive and front ski. A motor with 3 kW of continuous power pushes the bike to speeds up to 28 mph (45 km/h).

Instead of using a single fixed battery, the MoonBike has the capacity to hold one or two 2-kWh batteries, allowing riders to double up on range. A single battery powers the bike for between 11 and 21.7 miles (18 and 35 km), depending upon how hard the rider is twisting on the throttle, and a dual-battery doubles that range spread to 22 to 43.5 miles (36 to 70 km). The batteries are also removable.

MoonBikes don't have the all-out speed or range of full gas-engined snowmobiles, but the quiet, clean motor drive seems to pair quite well with the small, flickable frame to create a bike that should be a ton of fun to ride. Where the MoonBike does outshine a large, 400-plus-lb (181-plus-kg) snowmobile is in its compact, 176-lb (80-kg, with one battery) construction that will ensure much easier transport and storage.