> Knots: How to Tie the Gaff Topsail Halyard Bend/Hitch - pirateswithoutborders.com

Knots: How to Tie the Gaff Topsail Halyard Bend/Hitch 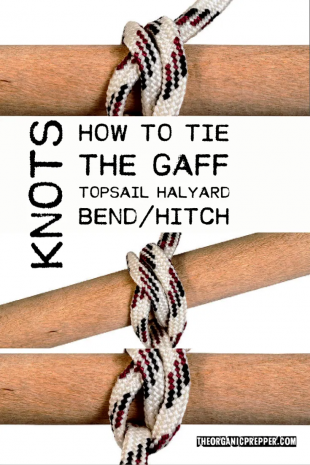 I have a strange fascination with knots and ropework right up there with rutabagas and searching for the perfect meatball and air guns.

Knots and ropework are skills and knowledge I think every prepper should have. I will be writing about various knots I have used here on the farm in practical uses, and some knots that I feel could be useful. While there are enough knots known to fill more than a few books, I will concentrate on what I think are some of the more useful ones.

In this particular case, let's say you are trying out using a tarp for lightweight camping using 550 cord. This bend/hitch would be used for the corner eyelet of your tarp. Imagine the carabiner is the eyelet.

Note: For instructional purposes and clarity, I did this ropework using a 5mm accessory cord. When I tried 550 cord, the black and OD green cord did not provide enough contrast to effectively render the pictures. The carabiner was not only used for clarity but as an example. The same knot/hitch could be applied in any number of manners.

-The end of the cord/rope that is being worked is called the running end.

-The end of the cord/rope that is not being worked is called the standing end.

-Green arrows/graphics indicate the direction of applied tension of cord/rope.

Step 1: Bring the cord/rope under the object.

Step 2: Bring the cord/rope around the front and then behind, making one wrap.

Step 3: Bring the cord/rope around for a second wrap and tuck behind the standing end.

Step 4: Bring the running end around the standing end and then through the two wraps.

Step 5: Pull on the running end to secure and complete the bend/hitch.