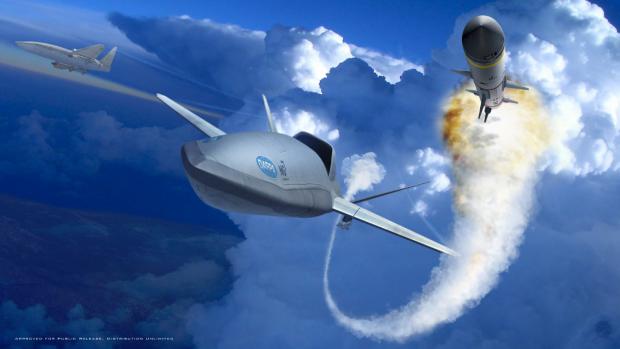 Called LongShot, the unmanned vehicle is intended to be launched from the air from a carrier vehicle, with the agency enlisting the services of three defense contractors to get the program off the ground.

Like DARPA's Gremlin drones that are currently under development, the LongShot program is hoped to result in an unmanned drone that can help keep valuable aircraft and their pilots out of harm's way. This forms part of the US military's strategy to supplement its fleets of combat aircraft with unmanned systems, with the Gremlin drone, which is designed to carry a suite of sensors, inching closer to airborne launches and retrieval after several years testing.

The agency says its objective with the LongShot program is to "significantly extend engagement ranges, increase mission effectiveness, and reduce the risk to manned aircraft." The drone will be capable of employing multiple air-to-air weapons, allowing manned aircraft to remain at greater distances from the enemy.

The get the ball rolling on the LongShot program, DARPA has awarded contracts to General Atomics, Lockheed Martin and Northrup Grumman for the preliminary design work. As the program progresses, the aim is to get a full-scale system developed and flight-tested, including demonstration of its abilities to fire weapons under operational conditions.