> 'Ten years ago this was science fiction': the rise of weedkilling robots - pirateswithoutborders.com

'Ten years ago this was science fiction': the rise of weedkilling robots 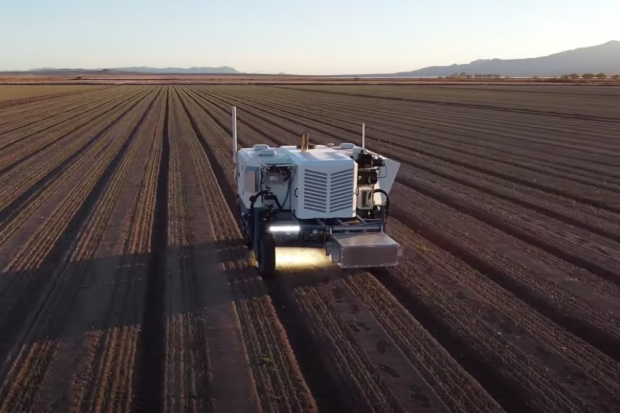 In the corner of an Ohio field, a laser-armed robot inches through a sea of onions, zapping weeds as it goes.

This field doesn't belong to a dystopian future but to Shay Myers, a third-generation farmer whose TikTok posts about farming life often go viral.

He began using two robots last year to weed his 12-hectare (30-acre) crop. The robots – which are nearly three metres long, weigh 4,300kg (9,500lb), and resemble a small car – clamber slowly across a field, scanning beneath them for weeds which they then target with laser bursts.

"For microseconds you watch these reddish color bursts. You see the weed, it lights up as the laser hits, and it's just gone," said Myers. "Ten years ago this was science fiction." Other than engine sounds, the robots are almost silent and each one can destroy 100,000 weeds an hour, according to Carbon Robotics, the company that makes them.

Carbon Robotics, in common with other agri-robotic startups, emphasizes the environmental benefits these machines can bring to farming by helping to reduce soil disturbance, which can contribute to erosion, and allowing farmers to heavily reduce or even eradicate the use of herbicides.

Farmers are under increasing pressure to reduce their use of herbicides and other chemicals, which can contaminate ground and surface water, affect wildlife and non-target plants, and have been linked to increased cancer risk. At the same time, they are battling a rise in herbicide-resistant weeds, giving extra impetus to the search for new ways to kill weeds.

"Reduced herbicide usage is one of the spectacular outcomes of precision weeding," said Gautham Das, a senior lecturer in agri-robotics at the University of Lincoln. Destroying weeds with lasers or ultraviolet light uses no chemicals at all. But even with robots that do use herbicides, their ability to precisely target weeds can reduce the use about 90% compared with conventional blanket spraying, Das said.