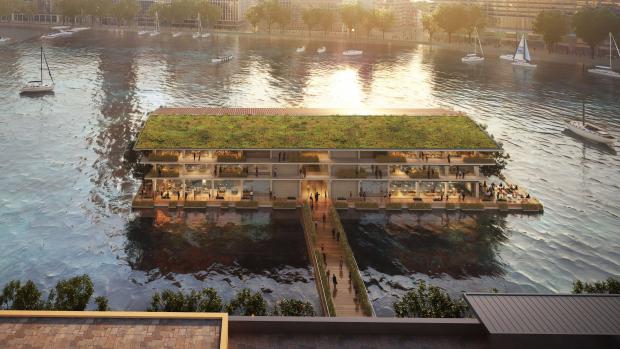 Global warming has been at the forefront of almost every nation as there's no denying the horrific effects it's had on so many countries across the world. For some nations, they've taken major steps forward in how they want to deal with the onslaught of undeniable climate change, by making huge changes to the ways they do things.

The Powerhouse Company, which has built the biggest floating office building in the world, has opened up in the Netherlands, and it will become the offices of the Global Center on Adaptation.

Sitting in the harbor of Rijnhaven in Rotterdam, the idea is that the company will work hand in hand to create a strong partnership to fight the negative effects of climate change across the globe, especially for countries that are sitting below sea level.

The Floating Office Rotterdam, otherwise known as FOR, was just recently inaugurated by King Willem-Alexander, alongside the former UN Secretary General Ban Ki-moon, who now is the head of the team that will occupy the floating building.

The 4,500-square meter building, which is equivalent to 48,500-square feet, also has three floors of office space. The building was built using prefabricated timbers placed on top of 15 custom built concrete pontoons. Meanwhile, the upper floors also have wrap around terraces for those that want to enjoy the incredible 360-degree views of the city as they walk around.

In order to shade the offices from the blazing sun, there is an overhanging roof that has 800-square meters of solar panels that power FOR, which are also hooked up to batteries located on land.

FOR also uses the water of the Dutch harbor that comes from the north. This works as a 'heat sink' which helps regulate the temperatures in the offices of the building without having to use climate control. Incredibly, the offices have also been made from materials that can be fully recycled once they are considered no longer safe for use.