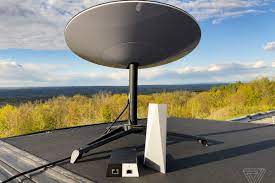 Elon Musk's Starlink satellite internet service will charge users a $25-a-month top-up fee if they want to use it while travelling  - but coverage isn't guaranteed.

This extra charge is on top of the $110-a-month subscription users pay to access the broadband network, beamed from thousands of satellites in low Earth orbit.

Portability has worked for some users in the past, but was never officially supported by the SpaceX-owned network, although Musk promised it would be introduced.

As long as the area is covered by one of the more than 2,000 Starlink satellites, users will be able to take their dish and router wherever they go, and get online.

Although it does appear the offering is restricted to within the North American continent, rather than being a global service.

The new service was first spotted by Tesla investor and YouTuber Dave Lee, who shared a screengrab of the 'Add Portability' option.

It looks like it will be a flexible service, with customers able to switch it on and off as required - paying the $25 for a vacation, then switching it off when they return.

The charge is likely because SpaceX has to allow extra bandwidth on all its connection points in case a portable user tries to connect, reducing how many customers it can sell to in that area.

Allowing users to connect to the Starlink network from anywhere is closer to the original idea for the service, proposed by CEO Elon Musk, who's currently buying social media network Twitter for $44 billion.