Robots may soon make your FedEx delivery from Walmart, Target and Pizza Hut 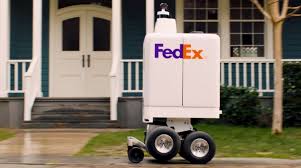 The SameDay Bot is so-named because its mission is to help retailers make same-day, "last-mile" deliveries to local customers. FedEx is collaborating with AutoZone, Lowe's, Pizza Hut, Target, Walgreens and Walmart.

FedEx plans to test the bot this summer in select markets and FedEx Office locations, starting in the company's own Memphis hometown, pending final approval by the city. That approval would appear to be likely since it has the backing of Mayor Jim Strickland.

According to FedEx, on average, more than 60 percent of merchants' customers live within three miles of a store location, demonstrating the opportunity for on-demand, hyper-local delivery.