The Boring Company gets approval to develop Las Vegas tunnel 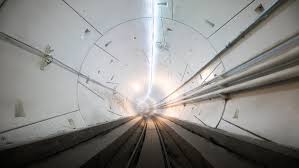 The Las Vegas Convention Center is currently undergoing a large renovation, with the facility to be expanded to cover 200 acres in time for CES 2021. To travel the center from end-to-end would involve covering a distance of around two miles (3.2 km), so the Las Vegas Convention and Visitors Authority put the call out for some on-property transport solutions.

After considering options from various candidates, the authority last week announced a recommendation for The Boring Company to design and build a "people mover" for its purposes. Today its 14-member board officially approved the recommendation, leaving Elon Musk's tunneling startup free to move ahead with its development.

In its current form, the proposal describes an underground loop system with the potential to transport 11,000 passengers an hour. These folks would travel on autonomous electric shuttles at high speeds to various stations around the center, with scope for future connections beyond the center, such as to the Las Vegas Strip, Las Vegas Stadium and McCarran International Airport. The Boring Company will now work with the tourism authority to finalize the design and construction plans for final approval by the board sometime around June 2019.