> Low-cost sensor glove could lead to robots that identify objects by touch - pirateswithoutborders.com 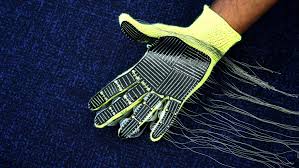 Called the Scalable TActile Glove (STAG), it uses 550 tiny pressure sensors to generate patterns that could be used to create improved robotic manipulators and prosthetic hands.

If you've ever fumbled in the dark for your glasses or your phone, then you know that humans are very good at figuring out what an object is just by touch. It's an extremely valuable ability and one that roboticists and engineers would love to emulate. If that was possible, then robots could have much more dexterous manipulators and prosthetic hands could be much more lifelike and useful.

One way of doing this is to gather as much information as possible about how humans are actually able to identify by touch. The reasoning is that if there are large enough databases, then machine learning could be brought to bear to perform analysis and deduce not only how a human hand can identify something, but also to estimate its weight – something robots and prosthetic limbs have trouble doing.