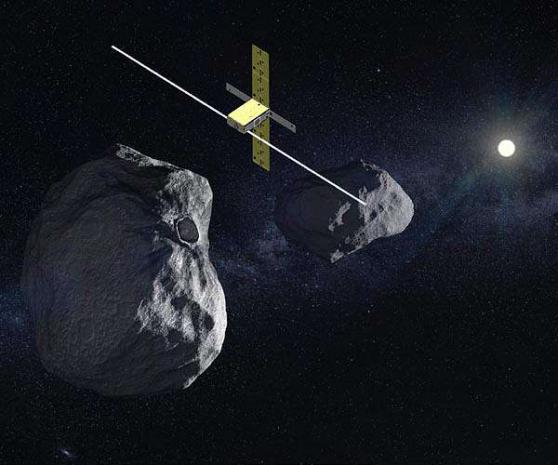 ESA's Hera mission for planetary defence, being designed to survey the smallest asteroid ever explored, is really three spacecraft in one. The main mothership will carry two briefcase-sized CubeSats, which will touch down on the target body. A French team has been investigating what might happen at that initial instant of alien contact.

"We've customised an existing drop tower and rigged it up with a system of pulleys and counterweights in order to simulate a low gravity environment," explains researcher Naomi Murdoch of the Institut Superieur de l'Aeronautique et de l'Espace (ISAE-Supaero), part of the University of Toulouse.

"We can go down to a few percent of Earth's gravity within the test box that we place within the drop tower, containing a model lander and simulated asteroid terrain. "Our team started out with a spherical lander touching down on a sandy surface, but we've progressed to cubic shapes more representative of the actual CubeSats. We've also been studying the influence of different surface materials, and sought to understand how the landing process varies with different material properties, gravity levels and velocities.

"This is necessary because each time we go to a different asteroid we end up surprised by what we find. For instance, Japan's Hayabusa2, currently exploring the Ryugu asteroid, has found much scarcer 'regolith' dust and more boulders than researchers had expected."

These two nanosatellites will fly closer to their target asteroid and take more risks than the main Hera spacecraft, and will both end up landing on the surface once their main mission goals are achieved.

The pull of gravity involved is less than one hundred thousandth of Earth's, far lower than can be reproduced by the ISAE-Supaero team. This means the touchdown itself will be more like a spacecraft docking than a traditional planetary landing.

"Imagine, for instance, if the CubeSats are released 200 m from the asteroid surface, then they will take over an hour to cover that brief distance to the surface," adds Naomi. "Everything moves in a kind of slow motion. Then there is also the possibility of bouncing off again.

"The Rosetta comet-chaser's Philae lander bounced off the surface of comet 67P/Churyumov-Gerasimenko repeatedly before finally coming to rest. Certainly if you were an astronaut on the surface you would have to walk with incredibly gentle steps to avoid leaving the surface and never coming back."

The hope is that both CubeSats survive their descent to return some observations, including close-up views of the surface material. But the main purpose of the ISAE-Supaero testing is to squeeze as much valuable data out of that initial moment of contact.

"We've fitted our test lander with accelerometers similar to those that one of the Hera CubeSats will be carrying," says Naomi. "We can see for example how the impact dynamics vary based on the material properties, from sand to large gravel, influencing how much we penetrate into the surface and how long the collision lasts.

"And we are learning how results differ based on how the CubeSats land, whether they come down corner or face first - a face-down landing would give a higher peak acceleration. At the end of our testing we hope to have a set of data to better interpret the actual landings - and prove useful for understanding other missions' interactions with asteroids as well."

Back in 2005 researchers were similarly able to acquire precious knowledge of the frozen methane crust of Saturn's Moon Titan by the way ESA's Huygens lander wobbled as it came to rest. The lander's motion suggests a surface consistency of damp sand, covered with a fluffy dust layer, with dampness just below the surface - and the presence of at least one 1-2 cm sized pebble.

ISAE-Supaero's tests so far underline how Hera's target 160-m diameter, extremely low gravity target asteroid is shaping up to be a truly alien environment. "The surface material is bound to behave differently, because reducing gravity reduces the normal force between particles and therefore also the friction - so it should take less force to penetrate the same sandy material.