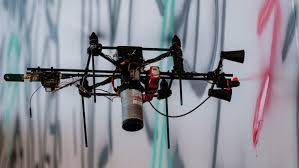 That painting was applied to the wall of a disused automobile manufacturing plant in the city of Turin's Aurelio Peccei park, by four drones working at the same time over two days (June 25th and 26th). A central control system instructed each paint-tank-wielding quadcopter as to what it should be doing, with a visual monitoring system keeping tabs on where the various aircraft were in relation to one another at all times.

Measuring 14 by 12 meters (46 by 39 feet), the finished painting is made up of three separately-applied differently-colored layers. These consist a black layer that sets the story, a red layer that represents Turin's communities and public spaces, and a blueish-green layer that "visually wraps the storytelling." It's the product of what is claimed to be the first time a swarm of drones has been used to create a collaborative work of art on a vertical surface.