> Virgin Orbit Just Dropped a Rocket From a Boeing 747 - pirateswithoutborders.com

Virgin Orbit Just Dropped a Rocket From a Boeing 747 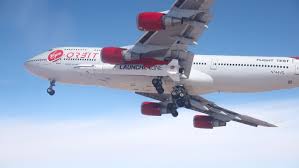 Unlike the military aircraft endemic to the area, this was a modified Boeing 747 jumbo jet, its bright red tail emblazoned with a single word: VIRGIN. A 70-foot rocket was strapped beneath its left wing, and about 30 minutes after takeoff jet pilot Kelly Latimer released the rocket and sent it careening to the desert floor 35,000 feet below.

Although the rocket was "fully loaded," as the company put it, its engines never fired—nor were they meant to. Instead, the rocket fell freely to Earth so the company could see how it performed during its first few seconds of freefall. This was the last major test for Virgin Orbit's air-launch system, which will launch rockets from a gutted jumbo jet, known as Cosmic Girl, to boost small satellites into orbit. It's a complicated maneuver, but it could significantly reduce the costs of getting to space.