> Dynamic, reprogrammable material goes hard under light and soft in the dark - pirateswithoutborders.com

Dynamic, reprogrammable material goes hard under light and soft in the dark 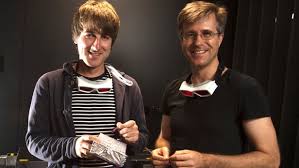 With an ability to stiffen up under a certain type of light and go soft in the dark, the new material shows particular promise for the world of 3D printing, where it could be used as a temporary support for complex structures that melts away when the job is done.

The new material is the handiwork of scientists from Australia's Queensland University of Technology (QUT), Belgium's Ghent University and Germany's Karlsruhe Institute of Technology, and consists of a polymer structure that can change its structure in response to light, and then revert back again.

Key to its changeable properties are the inexpensive chemical compounds the team has worked into the material. Among these are coupling molecules called triazolinediones and an ingredient common in moth repellent called napthalene.

Together, these enable the material to stay solid and firm so long as it is exposed to green LED light. But when the researchers switch the light off and the material is left in the dark for a little while, these chemical bonds begin to break up and cause it to become a soft, runny mess. Switching the light back on then sees it harden up once again.