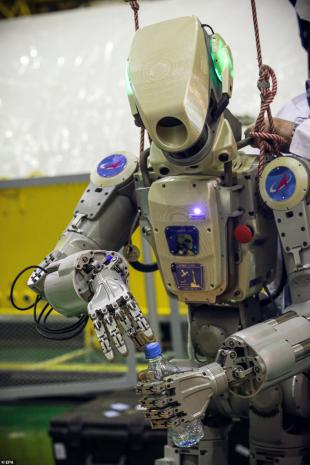 Russia's space agency has released eerie footage of its human-like android which will board the International Space Station next week.

Nicknamed Fedor - which stands for Final Experimental Demonstration Research - the anthropomorphous machine was seen undergoing a battery of stress-tests at the Baikonur Cosmodrome in Kazakhstan.

Dubbed Putin's robo-naut, the machine can be seen determining targets and honing in on specific points, such as steering wheels, which will surely come in handy while they're in orbit.

The scenes come ahead of its inclusion on the unmanned Soyuz MS-14 spacecraft on 22 August 2019.

Fedor stands 6-foot tall, weighs no less than 233 pounds depending on extra equipment, and can lift up to 44 pounds of cargo.

The robot can 'crawl, stand up after falling down, take and leave driver's seat in a car, use tools and operate in a regular building'.