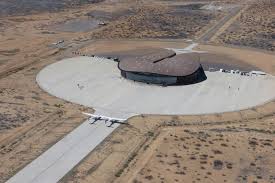 SIR RICHARD Branson has finally unveiled the Spaceport that he will use to fire space tourists into orbit next year.

His wacky space venture Virgin Galactic plans to charge £200,000 a ticket to launch passengers from the New Mexico port.

The company, owned by billionaire businessman Branson, announced the transfer of all its spaceflight operations to the port, dubbed Spaceport America.

Virgin Galactic had been carrying out test flights from Mojave, California - including the first successful launch of its tourism rocket plane into space in December last year.

Over 600 people have already paid £64.2million of deposits to the company to secure their tickets on the first spaceflights.