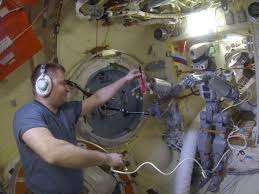 Russia's first humanoid robot has assisted an astronaut onboard the International Space Station after being blasted into orbit on an unmanned spacecraft.

The robot – named Fedor – was sent into space on August 22 to learn new skills so that it and others like it can carry out dangerous operations instead of astronauts, such as spacewalks.

The humanoid robot's duties are being supervised by astronaut Alexei Ovchinin while its functions are controlled by Alexander Skvortsov, who also work at the space station.

In the clip, Fedor was spotted holding an electrical drill while appearing to squeeze the trigger.

In the clip, Fedor was spotted holding an electrical drill while appearing to squeeze the trigger.

The robot soon hands the tool to Alexei Ovchinin.