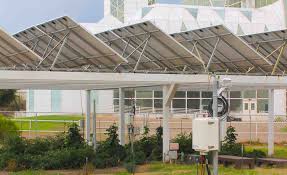 Solar panels may be able to supply us with much more than just clean energy; this new research says that it might also help crops to thrive in arid areas.

Agrivoltaics, also known as "solar sharing", is the co-locating of agriculture and solar photovoltaic panels. The idea has been gaining traction in recent years; however, few studies have monitored all aspects of the associated food, energy, and water systems involved. Furthermore, none of this research has focused on dryland areas: regions that experience food production challenges and water shortages, but have an overabundance of sun energy.

"Many of us want more renewable energy, but where do you put all of those panels? As solar installations grow, they tend to be out on the edges of cities, and this is historically where we have already been growing our food," said Greg Barron-Gafford, an associate professor in the School of Geography and Development and lead author on the paper that was published today in Nature Sustainability.

The University of Arizona-led research published in Nature this week found that current croplands are the "land covers with the greatest solar PV power potential" based on an extensive analysis of incoming sunlight, air temperature and relative humidity.

LOOK: This Tasty Seaweed Reduces Cow Emissions by 99%—and It Could Soon Be a Climate Gamechanger

"So which land use do you prefer—food or energy production? This challenge strikes right at the intersection of human-environment connections, and that is where geographers shine!" said Barron-Gafford. "We started to ask, 'Why not do produce both in the same place?' And we have been growing crops like tomatoes, peppers, chard, kale, and herbs in the shade of solar panels ever since."

Using solar photovoltaic, or PV, panels and regional vegetables, the team created the first agrivoltaics research site at Biosphere 2. Professors and students measured everything from when plants germinated to the amount of carbon plants were sucking out of the atmosphere and the water they were releasing, to their total food production throughout the growing season.