> Britain is behind the slaughter in Yemen. Here's how you could help end it David Wearing - pirateswithoutborders.com

Britain is behind the slaughter in Yemen. Here's how you could help end it David Wearing 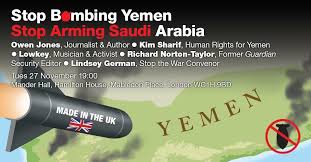 Nothing can diminish the threat of a disorderly Brexit, or the significance of Boris Johnson's recent anti-democratic prorogation of parliament. That those stories lead the news is no surprise. But when our government provides crucial support to a campaign of indiscriminate killing in Yemen that has claimed the lives of thousands of people, and this is treated as a footnote in our politics rather than a national scandal, it is plain that something has gone badly wrong.

This week a report by UN experts warned that Britain could be complicit in war crimes through its arming of the Saudi Arabia-led coalition intervening in Yemen's civil conflict. The report is the latest in a long line from the UN and the world's most respected NGOs documenting a consistent pattern of violations. The experts note that leading arms providers like the UK "have a specific influence" on the belligerents "and may be held responsible for providing aid or assistance for the commission of international law violations".