> Everything You Never Wanted to Know About Artificial Sweeteners - pirateswithoutborders.com

Everything You Never Wanted to Know About Artificial Sweeteners 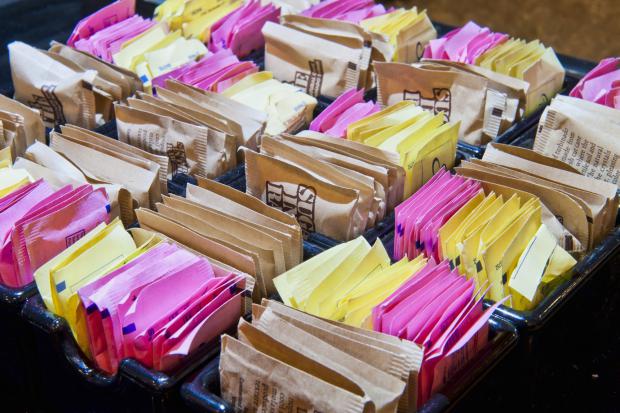 There are a lot of myths about artificial sweeteners. The main one is that they're actually better for you than regular sugar. Low-calorie sweeteners have been around for decades now, and we're finally at a point where we've studied them enough to understand roughly how they work and what effect they have on our bodies.

Let's get this one out of the way. While it is true that some rodent studies found increased rates of certain kinds of cancer, like leukemia, after eating artificial sweeteners, subsequent testing has shown that you don't need to worry about getting cancer from your diet soda. You'd have to regularly consume astronomical doses of the stuff. On the other hand, we do know that obesity is a major risk factor for many kinds of cancer, so maybe focus on that instead of sucralose.

So I should pick diet soda over regular to lose weight then, right?

We hate to be that guy, but "well, actually …" a lot of the evidence suggests you'd be better off just trying to cut back on the regular soda. It does seem like having fewer calories should help you lose weight, but studies indicate that weight loss isn't as simple as calories in versus out. You can trick your tastebuds (sort of) into thinking that aspartame or saccharin is the sugar you crave, but your brain isn't so simple.

More and more evidence is piling up that suggests the diet drink trend is misguided. Or as one 2008 study on obesity and artificial sweeteners asked in its conclusion: "are [artificial sweeteners] fueling—rather than fighting—the very epidemic they were designed to block?"

A few recent studies suggest that consuming fake sugar actually trains your insulin response to store more fat, not less. Basically when you consume real sugar, your tastebuds send an alert to your pancreas that says, "Hey, calories are on the way! Prepare to produce insulin!" The insulin then helps break down the sugars, which either provide immediate energy or go into fat cells for storage. If your body interprets something as sweet when there's not really sugar on the table, though, it may end up producing that same insulin response. So that diet soda is still prompting your pancreas to store fat, even though you're not getting to enjoy real sugar—your brain can tell the difference. Artificial sweeteners don't trigger our reward circuits the same way, so you don't get the satisfaction of ingesting sugar.

And on top of that, constantly pumping up your insulin response eventually leads it to malfunction. This is essentially what happens in type 2 diabetes, but can occur to a lesser—but still harmful—extent in otherwise healthy people. Eventually your pancreas starts producing too much insulin in response to all food, making you pack on the pounds.

This whole theory is still being tested, but it's in line with what we observe in people who drink diet beverages: they tend to gain weight. In observational studies you can't tell whether that's causative or if it's just that overweight people tend to drink more diet soda than people at a healthy weight. One clue is that scientists observe what's known as a dose response. The more artificial sweeteners people consume, the more weight they seem to put on. That suggests it might be the fake sugars themselves that prompt the gain in poundage, not just an association.