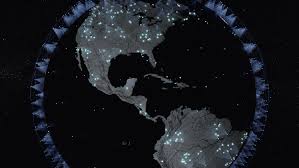 They have a Starlink.com website. Enabled by a constellation of low Earth orbit satellites, Starlink will provide fast, reliable internet to populations with little or no connectivity, including those in rural communities and places where existing services are too expensive or unreliable.

Marcus House has image with 42000 and 12000 satellites around the world and a video describing the latest information.

Starlink is targeted to offer service in the Northern U.S. and Canadian latitudes after six launches, rapidly expanding to global coverage of the populated world after an expected 24 launches. SpaceX is targeting two to six Starlink launches by the end of this year.

Each Starlink satellite weighs 227 kilograms and have krypton ion engines.