> GoPro Max is claimed to be three cameras in one - pirateswithoutborders.com

GoPro Max is claimed to be three cameras in one 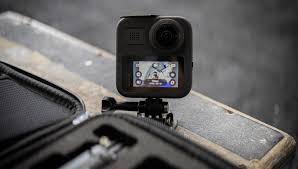 Featuring two lenses – one on either side – the Max can simply be used as a single-lens Hero-style actioncam. It's waterproof to a depth of 16 feet (5 m), utilizes GoPro's HyperSmooth digital video-stabilization technology, and shoots video at a maximum resolution of 1080p/30fps.

Additionally, it can be switched between four digital "lenses," offering four fields of view: Narrow, distortion-free Linear, Wide, and an even wider Max SuperView. While people using it as an actioncam will want to go wide, vloggers will instead prefer a setting that doesn't have such a crazy "fish-eye lens" look.

This leads into its next intended use – a vlogging camera. Users in this mode are helped out by a forward-facing touchscreen display, which lets them see them see how their shot is framed while they're filming themselves. A "shotgun mic" feature is also enabled, for selectively picking up audio from directly in front of the camera.