> US Navy drops supplies to submarine at sea by DRONE for the first time - pirateswithoutborders.com 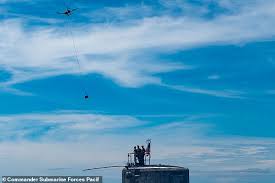 The military organization has successful delivered a five-pound payload consisting of circuit cards, medical supplies and food to the Virginia-class fast-attack submarine USS Hawaii (SSN 776) while at sea.

Delivering supplies by drone will eliminate the need for submarines to pull into ports for goods and allow them to spend more time in the fight.

This is the first time the US Navy has employed the use of a drone to deliver goods and Lt. Cmdr. Christopher Keithley, assigned to COMSUBPAC said 'What started as an innovative idea has come to fruition as a potentially radical new submarine logistics delivery capability.'

'A large percentage of parts that are needed on submarines weigh less than five-pounds, so this capability could alleviate the need for boats to pull into ports for parts or medical supplies.'

The idea of using a drone was birthed one year ago in the Submarine Force Innovation Lab (iLab), which has since partnered with the University of Hawaii Applied Researcher Lab.