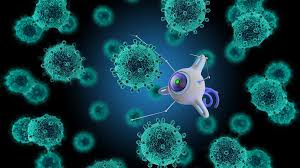 Bio-inspired Quorum Sensing in robots fabricated from DNA origami can communicate by transmitting and receiving diffusing chemical signals. The mechanism has features such as programmable response thresholds and quorum quenching, and is capable of being triggered by proximity of a specific target cell. Nanoscale robots with swarm intelligence could carry out tasks that have been so far unachievable in diverse fields such as industry, manufacturing and medicine.

Quorum Sensing (QS) is a well-studied example of collective behavior. See the 2013 TED Talk below on Bacterial quorum sensing chemical communication. This mechanism of cell-cell communication in bacteria utilizes secreted signal molecules to coordinate the behavior of the group. Linking signal concentration to local population density enables each single bacterium to measure population size. This ability to communicate both within and between species is critical for bacterial survival and interaction in natural habitats and has likely appeared early in evolution. Detection of a minimal threshold of signal molecules, termed autoinducers, triggers gene expression and subsequent behavior response. Using these signaling systems, bacteria synchronize particular behaviors on a population-wide scale and thus function as multicellular organisms.

QS-inspired approaches have been adopted in artificial systems, including mobile robots and wireless sensor networks, and naturally occurring genes have been harnessed in synthetic biology to implement QS at the cellular level.