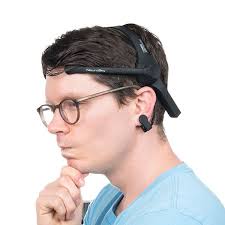 The capacity and reliability of biological memory could be exceeded by a constantly growing flux of information to remember and operate by. Yet, our memory is fragile and could be easily impaired, and the prevalence of memory disorders is increasing in correlation with the population's mean age. As expected, auxiliary memory devices (such as writing pads and computers) are abundant but are operated indirectly using significant effort compared with biological memory. We report a working prototype of a simplified, 4 KB random-access memory (RAM) that can be written to or read from using thought and could be embedded more seamlessly than other artificial memory aids. The system analyses EEG signals to extract attention levels, which trained subjects can use to write messages into an RFID sticker, or read from it on a display. We describe basic modes of using memory by a single subject, emulate common forms of social communication using this system, and highlight new forms of social usage and allocation of memories that are linked to specific persons. This preliminary prototype highlights the technical feasibility and the possibilities of implantable thought-operated memory devices and could be developed further to provide seamless aid to people suffering from memory disorders in the near future.