> Meet the creepy robots poised to take over the world - pirateswithoutborders.com

Meet the creepy robots poised to take over the world 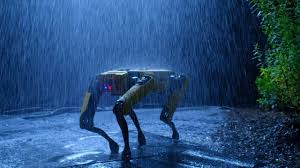 On Thursday, Toyota debuted its new, upgraded humanoid robot, the T-HR3, which is controlled remotely by someone wearing a headset and wiring on their arms. Toyota claims that in the future, this machine, which is smoother, lighter and easier to use than past models, could be used "to perform surgery in a distant place where a doctor cannot travel. It also might allow people to feel like they're participating in events they can't actually attend," according to the Associated Press.

That same day, it was announced that Swiss researchers developed a light, quick robotic bug called the DEAnsect, which can withstand several whacks from a flyswatter and can survive being stepped on by a shoe. The miniature robot was designed with dielectric elastomer actuators (DEAs), artificial muscles, a microcontroller for a brain and photodiodes as eyes. The bug, which weighs less than a gram, can carry five times its weight, recognize black-and-white patterns and follow lines drawn on the ground.