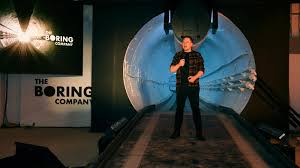 With Musk's ego higher than ever, he tweeted Friday night that Boring Company would complete a commercial tunnel in Las Vegas in the near term and be fully operational in 2020.

"Boring Co is completing its first commercial tunnel in Vegas, going from Convention Center to Strip, then will work on other projects," Musk tweeted late on Friday.

Last month, we noted how Boring officially won the contract from Las Vegas to build a "subterranean transit system" by undercutting the bids of established players in the engineering space.