> As robots take over warehousing, workers pushed to adapt - pirateswithoutborders.com

As robots take over warehousing, workers pushed to adapt 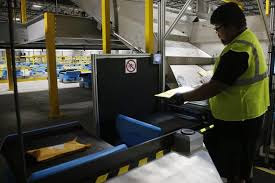 But doing your job side-by-side with robots isn't easy. According to their makers, the machines should take on the most mundane and physically strenuous tasks. In reality, they're also creating new forms of stress and strain in the form of injuries and the unease of working in close quarters with mobile half-ton devices that direct themselves.

"They weigh a lot," Amazon worker Amanda Taillon said during the pre-Christmas rush at a company warehouse in Connecticut. Nearby, a fleet of 6-foot-tall roving robot shelves zipped around behind a chain-link fence.

Taillon's job is to enter a cage and tame Amazon's wheeled warehouse robots for long enough to pick up a fallen toy or relieve a traffic jam. She straps on a light-up utility belt that works like a superhero's force field, commanding the nearest robots to abruptly halt and the others to slow down or adjust their routes.