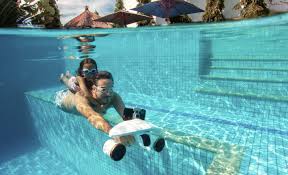 Like the WhiteShark, the Mix Pro pulls snorkelers or divers along using not one but two electric-motor-powered propellers. This feature sets it apart from the various single-prop scooters already on the market.

The life of the Mix Pro's removable lithium-ion battery life is the same as that of the WhiteShark – at a claimed 60 minutes per 2-hour charge – as is the scooter's maximum depth rating of 40 meters (131 ft). Battery level and current speed are displayed on a built-in color LED screen.

Another new feature on the Mix Pro is a mount for third-party underwater smartphone housings, so users can record their adventures via the phone's camera. The GoPro mount from the WhiteShark is also still there.